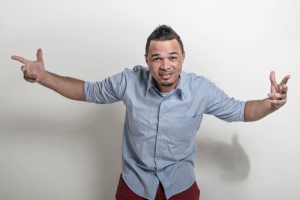 The Bahamian word of the day is: SawyerBoy! You’ve undoubtedly scrolled across his hilarious videos on your timeline, seen him on a billboard, or even attended an event he’s hosted. Even if this is somehow your first time hearing about this Bahamian Icon, it certainly won’t be your last!

Timico Sawyer is busy making a name for himself in the world of web-comedy and beyond. It wasn’t until recently that he really shared his comedic talent with the wider public. During his school days at D.W. Davis, he played every sport he could, but didn’t explore the performing arts. He was never the loud or goofy kid in school. In fact, very few people knew the humorous side of him.

Even now that he’s publicly embraced his comical talent, he says “I kind of blend into the moment and say something that happens to be funny. I’m never gonna be the loud one in the building or the one in the corner making all the jokes. That’s not me, unless I have something planned to say in public. I’m often talking fool, but I’m not the boisterous one.”

Outside of his day-job at Commonwealth Bank, Timico  is an increasingly sought-after host for weddings and other special events. Of this, he says, “people are seeing a different side of me. If you’re having a formal event, you don’t have to worry about me acting a fool. I can handle myself in any crowd”. Timico was also named as a Brand Ambassador for Fine Threads, so you’ll notice his face in ads all over town. “People call me a Bahamian celebrity, but I still een feeling it. I’m enjoying it though.”

Humility is important to Timico, especially in this digital age when everyone seems to be ‘all about simply getting likes’. With a son and daughter (his “pride and joys”) who look up to him, there’s nothing more important to him than being a good role model. In fact, you’ll notice that unlike many comedians who push the boundaries of explicit content, SawyerBoy TV content is fairly family-friendly.

Timico names Jim Carey and Eddie Murphy as his greatest comedy influences. [FYI: He does a great Fire Marshall Bill impression]. “I grew up on In Living Color.” While he hasn’t broken into stand-up comedy, he has plans to do so in the future. As for local influences, he says that Collage Dem Entertainment helped him to see that he could develop some success with making entertaining videos. “Collage Dem really started it for Bahamians and then it branched out from there”. The public can look forward to a collaboration between SawyerBoy and TAP soon. He enjoys working will her and calls her “a very intelligent person.”

From day one, Timico has been a very involved father. He received a lot of compliments for the fact that he brought his son and daughter on stage with him to accept his Bahamian Icon Award during the 2015 ceremony. “I couldn’t enjoy that moment without them,” he grins proudly.

Some call his brand of humor Island Lifestyle Comedy. He’s great at putting a funny twist on everyday happenings, or poking fun at local newsworthy issues, and has even done some socially conscious stuff, such as calling attention to parental neglect. “I’m trying to bring more things to the light. Like letting people know that they don’t have to be doing certain things just to fit in. I want them to believe that they can actually do more, and you don’t have to be just like your mommy or daddy, or aunty. These are my stories. They’re true.” When it comes to supporting local charities, he states, “I’d do anything for a good cause. My heart is soft. I can’t take to see certain things.”

“I’m in love with it now. You know that blushing Emoji? That’s me. School girls will come up and want to take pictures. Even grown men, and gangsters tell me they want a picture with me to show their girl!”

“What’s I’m doing now is just the beginning. There’s still a whole lot more I have to offer. I’m trying to get more than 400,000 followers. When I get there, I’ll take it up a notch.” If you’re a SawyerBoy fan and can’t wait to see what else he has in store, follow him on Youtube; Twitter; Instagram; and Tsu