Since breaking into the music scene around the turn of the millennium, Megaton has experienced all of the ups and downs one expects from the industry, but 2016 is really going to be his year to shine!

Megaton linked up with Sonic Bids last year and was invited on an epic tour that included stops in Hawaii, Portland, and D.C. and showed him how thirsty the international audience was for his style of music.”No one in Hawaii had ever heard my music, but by the time I finished my show, I had tons of people looking to buy it”. This year, he has something similar lined up, but the tour will also include a stop in Nassau at the end of May, before venturing to Hawaii for the first 5 days of June.

Dubbed the Bahamian DMX because of his deep, reverberating voice, Megaton was really the first Bahamian solo act. His music used to be angrier, but he now mainly sticks to a unique form of hip-hop that he calls “a soca-reggae infusion”. Although he’s been compared to Flo Rida and Pit Bull, he stated, “I want to sound like I’m from the Carribbean/Bahamas. I use Goombay/Junkanoo to make a different sound. People like Bryan Michael Cox tell me to stick to my sound [because] the world wants something different. It takes that one song to be on a track, and then it takes off.” Though he’s probably best known for “Island Summer”, his sound and lyrics have matured a lot since then. So, downloading “Don’t Take Your Love” is the best bet, if you’re experiencing his music for the first time.

Unfortunately, as Megaton pointed out, “for Bahamian artists not doing traditional Bahamian music, it’s a struggle. We just don’t have that financial backing like they would in

the U.S.” His goal is to deliver The Bahamas to the world; however, he feels that the government needs to do more to help. He lauds Air Jamaica for playing local music on their planes, and thinks that we need to start using artists as promotional tools here too.

In the past, Megaton’s teamed up with several musicians, including Dyson Knight, and he’s currently working on songs with MDeez, as well as a Hawaiian rapper named Tripple Los. “I have no problem working with any artists in this country as long as they leave their egos at the door. A lot of people think that as soon as they get a song on the radio over here, they have it made”.

While it’s important to Megaton to share his music locally, he also recognizes the need for international recognition in order to really generate income from music. “No Bahamian artist can come and tell me they sold a million CDs in the Bahamas”. During his performances in the U.S. people were dancing, taking pictures and requesting autographs on a whole other level – and at the end of the day, it made him realize that those are the people who are going to pay for his music.

Anyone with a personal connection to Mega knows that he has a strong interest in Bahamian politics. While he said that he respects KB for speaking his mind, he hasn’t yet written a song about “the social ills in the country”. (Since this is not the medium to discuss all that he’s disgruntled with, I’ll just stick to entertainment beefs).  He suggests that “Culture” should be its own Ministry, or at least be paired with “Tourism” in order to improve the promotion of Bahamian cultural events and art- maybe even a Junkanoo group at the Smithsonian! He  would also like to see Junkanoo receive more substantial funding, as it’s so much more than just a parade that happens twice a year.

“Junkanoo is addictive. When that drum starts to hit, and gets into your system, you’re going to move”. He rushed with the Valley Boys from 1994-2002. As a drummer, “I would spend at least 500 $ a parade. Every costume I rushed in, a tourist would pay me 50-100 dollar for”. He really respects people like Quinton Barabas Woodside, who shows people how to make drums and cowbells etc., and would love to see more government grants supporting these ventures. Grimacing, he explains, “I love my culture and it hurts me to see that there’s no vision for it”. Despite some major improvements to Junkanoo this year, he still believes there is a lot more that could be done.

Megaton will be dropping a new album this year, entitled “Linky’s Boy”, which pays tribute to his late father. His dad started out as his greatest critic, as the hard-working Eleutheran didn’t see music as a reliable source of income; however, upon hearing his son on the radio for the first time, he understood, and fully supported Mega’s dream. In turn, Mega strives to be a good role model for his girlfriend’s children, and for other youth of the nation.

Given the fact that Mega began playing music at age 4, a career in writing, singing and producing seems a given. However, like many talented youth, he was pushed to educate himself in a trade that would make him money rather than pursuing his passion. When he finally went off to school for music in 2009, he had already been working a good job, but wasn’t truly happy because he felt like he was wasting his talent.

Interestingly, it took advice from one of his plumbing clients to push him toward his goals. “I saw how successful [Lionel Symonette] was with his tour company, and how happy he was with his marriage of 50 years, and asked him what he thought. He believed in Mega, but also warned that there would be “no turning back.” Megaton smiled as he recalled the conversation. “That’s why I say music is all I have left. I have to make it work. I invested everything I have into it”. Where he is right now is exactly where he wants to be. 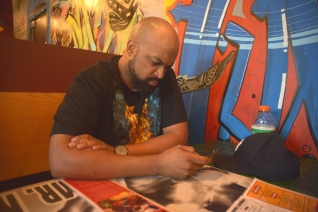 “Production and songwriting is my calling. I don’t make beats, I make music. I already have a song in my head that that beat is going to”. He laughs, “I have about 300 voice notes of me humming a melody into my phone, which I sometimes pull up years later”. He is proud of his work writing and producing Paula McKeva’s music. She already has a single out called Amnesia but her EP will be coming out later in the year. “I call her the modern day Mary J. Blige.”

With respect to the local music scene, he says, “We’re all in a boat, and everyone’s got a paddle, but everyone’s paddling in different directions. We’re never going to get anywhere! We have to help each other and end this ‘black crab syndrome’. I wish everybody the best – even if they don’t wish me the best”

To learn more about Megaton, and to purchase his music, check out the following links: